Gene variant staves off Alzheimer’s in some people 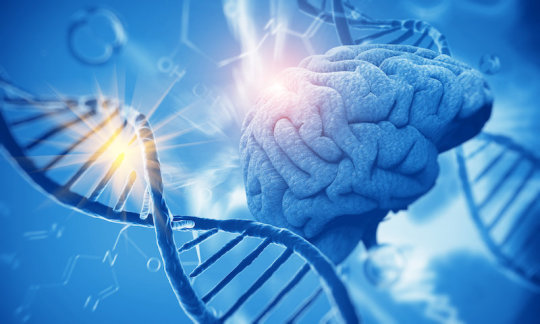 People with a gene variant that puts them at high risk for Alzheimer’s disease are protected from its debilitating effects if they also carry a variant of a completely different gene, Stanford University School of Medicine investigators report in a large new study.

Their findings, to be published Apr. 13 in JAMA Neurology, suggest that a substantial fraction of the estimated 15% of Americans carrying the high-risk gene variant are protected to some degree from Alzheimer’s disease by a variant of the other gene. (A gene will often come in a variety of versions, or variants, that can produce different traits.)

The findings also may help drug developers better identify clinical trial participants and treatments for what, despite billions of dollars spent in pursuit of effective therapies, remains a disease without a cure.

About 5 million Americans — including roughly 1 in 10 people age 65 or older and one-third of those age 85 or older — have symptomatic Alzheimer’s disease. Even larger numbers have a subtler precursor called mild cognitive impairment. About half with this condition move on to full-blown Alzheimer’s. There are medications that can slow development of cognitive symptoms somewhat, but no available drugs prevent the disease’s progression or extend patients’ lives.

What causes Alzheimer’s isn’t well understood. There are probably numerous factors. But scientists have known for three decades about one main contributor to the disorder: a gene variant, ApoE4, that’s more than three times as frequent in Alzheimer’s patients than among people without the disease.

“While 15% of healthy people have the ApoE4 gene variant, it’s present in more than 50% of Alzheimer’s patients,” said Michael Greicius, MD, MPH, associate professor of neurology and director of the Stanford Center for Memory Disorders. “One copy of ApoE4 triples or quadruples your risk, compared with no copies. If you’re carrying two copies, your risk goes up tenfold.”

Greicius is the senior author of the study. Postdoctoral scholar Michael Belloy, PhD, is the lead author.

“Having one or two copies of ApoE moves the age at which you get sick earlier by five to ten years,” Greicius said. “But, it turns out, not all ApoE4 carriers are destined to develop the disease. The gene variant we studied protects you from getting Alzheimer’s.”

A hallmark of Alzheimer’s is the aggregation in the brain of gummy deposits, or plaques, composed of a protein called beta-amyloid. Amyloid aggregation starts more than 10 years before symptoms appear.

“By the time someone is symptomatic, the amyloid horse is out of the barn,” Greicius said.

Recent technological advances have enabled the early prediction of Alzheimer’s onset by analyzing beta-amyloid levels and other protein levels in cerebrospinal fluid, and by detecting the buildup of Alzheimer’s plaques in the brain via imaging. These biomarkers make it possible to predict the disorder’s onset before outward symptoms become apparent, or to confirm diagnoses already reached on the basis of behavioral observations.

Yet even having two copies of ApoE4 by no means ensures that a person will develop Alzheimer’s. Some such people live to age 85 or 90 without symptoms; they’re protected, somehow, from the debilitating effects of this gene variant.

Greicius wondered why. Did some of these people share genetic variants that protect them?

The role of klotho

He and his collaborators focused on a variant of a gene for a protein called klotho. High blood levels of klotho predict longevity in animal studies. There’s also evidence for this in humans. For complicated reasons, carrying a single copy of the klotho variant — a genetic status referred to as heterozygous — but not two copies increases circulating levels of the klotho protein.

To assess the relationship between klotho-variant status and ApoE4-asociated Alzheimer’s risk, the researchers combed through publicly available databases for data on 22,748 ApoE4 carriers with and without symptoms of Alzheimer’s disease. All subjects were age 60 or older and of Northwestern European ancestry.

The researchers tallied the likelihood of those subjects with or without a single copy of the klotho variant winding up with Alzheimer’s symptoms versus remaining asymptomatic. They tracked asymptomatic ApoE4 carriers over time to determine whether those with a single copy of klotho were less likely to have developed Alzheimer’s symptoms. They also analyzed about 650 subjects to see if those with a single copy were less likely to develop cerebrospinal beta-amyloid levels or beta-amyloid brain deposits predicting the disease’s onset.

The results were unambiguous.

“In this ApoE4 carrier group, carrying one copy — but not two — of the klotho variant reduced Alzheimer’s risk by 30%,” Belloy, the study’s lead author, said. It substantially slowed the progression from symptom-free status to signs of mild cognitive impairment or outright Alzheimer’s disease. And it lowered the beta-amyloid burden in the brains of ApoE4 carriers who had not yet progressed to dementia.

Some 25% of Americans are heterozygous for the protective klotho variant. (A much smaller share have two copies, and the rest have none.) Genetic testing for klotho status among ApoE4 carriers could provide a better predictor of Alzheimer’s risk in people with the ApoE4 variant, Greicius said.

In addition, drug companies will want to consider excluding patients with a single klotho copy in their clinical trials to maximize the contrast in outcomes among ApoE4-positive participants receiving or not receiving an experimental treatment, Greicius said.

These trials often preferentially recruit ApoE4 carriers, who are predisposed to Alzheimer’s, in order to make it easier to detect within a reasonable time frame whether an experimental drug works. By eliminating prospective participants who carry ApoE4 but are potentially protected from Alzheimer’s by the klotho variant pinpointed in the new study, researchers can hope to get a clearer picture of a test drug’s value.

Learning more about how the protective gene variant works may also lead to a more sophisticated understanding of ApoE4’s debilitating effect on cognition — and, importantly, help researchers to zero in on therapeutic targets for the prevention or mitigation of those effects, Greicius said.

Greicius is a member of the Wu Tsai Neurosciences Institute at Stanford and the Stanford Alzheimer’s Disease Research Center.

The work was funded by the National Institutes of Health (grants AG060747 and AG047366), the Iqbal Farrukh & Asad Jamal Center for Cognitive Health in Aging and the South Palm Beach Country Foundation.