Most dangerous type of Breast Cancer may present in you.….! 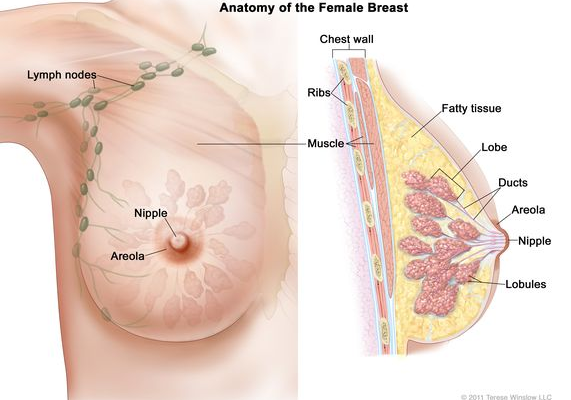 Cancer
Uncontrollable cell division without any requirement of growth factor or signal of a cell is known as cancer. Tumours cells are damaged cells or cancerous cells. When the tumour settles in confined region of a tissue or organ it is known as benign tumour and when it proceeds to non-native regions via blood is called as malignant tumour.
Causatives of cancer
 DNA damage.
 Continuous exposures to radiation – example: UV.
 Cell cycle and signalling errors.
 Inheritance.
 Usage of carcinogenic substances.
Breast Cancer
There are several cancer types. One of the most predominant cancers in females is breast cancer. It can also be seen in males. When a cancer cell settles in breast it is called breast cancer.
Symptoms – lumps or lesions in breast, new inverted nipples, size / shape / colour change in the breast.
Statistics – one out of eight women (12.9%) have breast cancer (American cancer society 2022).
Diagnosis – Mammogram / biopsy.

Circular RNAs (circRNAs) are a novel type of ncRNAs distinguished with closed-loop structure. Highly stable than their previous linear structure due to the lack of a 5′ -cap and a 3′-polyadenylated tail structure. circular RNAs are found in large number which are highly conserved, specific to cell type, lending credence to idea where it can be considered as functional units. Currently, several research has found circEIF3H play an important role in a variety of physiological process with pathological condition, particularly oncogenesis and tumour growth. The most often described circRNAs mechanism (circEIF3H) is to capture miRNA sponge, showing miRNAs functional loss and consequent activation of miRNA- targeted genes. It enhances proliferation of TNBC and causes apoptosis by increase in activation of BCL11A expression by miR-4753/miR-6809 binding, and it supports miR- 148a-3p/miR-152-3p which boost USF1 expression which increases TNBC pathogenesis. TNBC can be treated by suppressing circEIF3H.

A transcription factor associated to osteogenesis that has emerged as a major transcription repressor in TNBC. Histone deacetylation and ubiquitylation were catalysed by MTA1/NuRD and CUL4B – CRL4B complex is recruited by RUNX2 to produce a transcriptional-repressive complex. RUNX2-NuRD/MTA1-CRL4B complex targets a group of genes, which is important in proliferation of cell, EMT, and invasion, including PPAR (peroxisome proliferator-activated receptor alpha) and SOD2 (superoxide dismutase 2). RUNX2-NuRD/ MTA1-CRL4B complex promotes proliferation, invasion, carcinogenesis, bone metastasis of breast cancer in invivo, invitro. RUNX2 expression is increased in TNBC. RUNX2 is a potential target for TNBC.

GPR110
GPR110 is overexpressed in TNBC. GPR110 knockdown decreased HER2+ breast cancer cells, cell proliferation, formation of mammosphere, and invasion. cDNA is delivered by lentiviral increased independent proliferation of cell, formation of mammosphere, and migration in HER2+ breast cancer cells. Furthermore, overexpression of GPR110, increased the percentage of Aldefluor-positive tumorigenic cell population, underscoring GPR110’s significance as a tumorigenesis and metastasis process mediator in breast cancer (HER2+). Expression of GPR110 was greater in TNBC, than subtypes A and B. According to the publicly available TCGA dataset, 4% of all breast tumours have amplified GPR110. GPR110 overexpression was associated with a worse TNBC. Patient-derived xenograft models of TNBC, compared to mammary tumours (WHIM2 and WHIM30). GPR110 knockdown inhibited TNBC dependent and independent proliferation of cell, formation of mammosphere, and invasion. Overall, GPR110 can be therapeutic target in HER2-positive and TNBC. GPR110 antagonists discovered through drug discovery activities will be important validating tool for GPR110 as a target for TNBC.
Conclusion
Cancer is often treated with surgery, chemotherapy, radiation treatment, or both. Hormone receptor-positive tumours, which may be detected by the presence of oestrogen receptors and progesterone on their surface, are also treated with hormone-blocking treatment. Because ER+ cells require oestrogen to proliferate, they can be addressed with medicines such as tamoxifen or an aromatase inhibitor (example: anastrozole). Furthermore, HER2 overexpression in TNBC with recurrence and prognosis, and HER2+ cells react to the monoclonal antibody trastuzumab, which has greatly improved the prognosis. TNBC lacks all three receptor types and varies kinds of invasive BC which becomes malignant easily. Breast cancer outcomes vary based on the kind of cancer, and the overall survival percentage for TNBC patients is surprisingly low. These targets can thus be employed to treat TNBC.

0 comments on “Most dangerous type of Breast Cancer may present in you.….!”