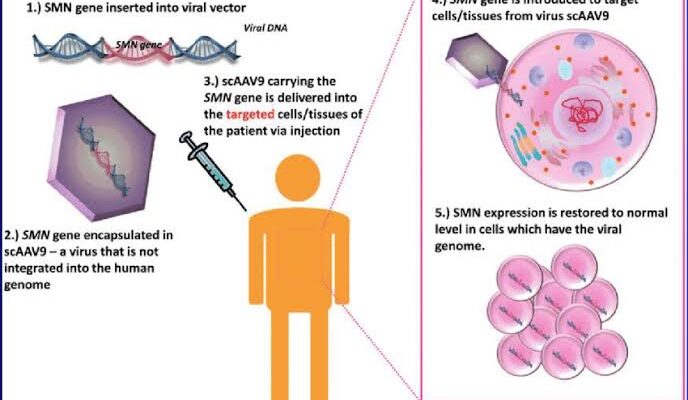 A rare neuromuscular condition called Spinal Muscular Atrophy is known to cause motor neurons loss and progressive wastage of muscles. It is often identified in infancy or early childhood, and leading hereditary mortality of infant. It may also develop later in life, when the illness has a lesser course. The most prevalent symptom is increasing weakening of voluntary muscles, with arm, leg, and respiratory muscles being the first to be affected. Poor head control, swallowing difficulties, scoliosis, and joint contractures are all possible complications.

The conventional categorization of spinal muscular atrophy into many kinds is based on the age and the symptom severity. SMN1 gene codes for SMN, a protein required for motor neuron survival and mutation leads to SMA. Spinal cord disrupts communication between the brain and the musculoskeletal system is due to neuronal loss. Another gene, SMN2, is thought to be an illness gene because the more SMN2 copies there are, the milder the illness progression. SMA is diagnosed based on symptoms and validated by genetic testing.

Genetically altered cells which produce a benefit by repairing or reconstructing defective genetic material is called gene therapy. Addressing a genetic problem at its root cause is the aim of gene therapy. If, a specific gene is mutated in a defective way, which results in the dysfunctional protein production, causing an inherited disease. Gene therapy could help to deliver a copy of undefective gene which does not contain any mutation, leading to the appropriate protein complex production. Gene replacement therapy, is used to treat hereditary disorders like retinal disorders. Recessive disorders can be treated with gene replacement therapy.

New avenues for use and utilisation in gene therapy was introduced and it is known as CRISPR gene editing which opened up to repair of a specific genetic flaw, rather than a gene replacement. Gene therapy of prosthetic tries to enable cells in the human body to treat that which do not perform normally. Gene therapy of vision restoration, which used to eyesight restoration against advanced retinal disorders in people. Retinal illnesses end-stage cause photoreceptor cells loss which is irreversible. Gene therapy of prosthetic can produce photosensitive proteins which can deliver to the retina cells, which allow visual information to the brain.

SCGT (somatic cell gene therapy) can be delivered into any host cells except gamete cells, or undifferentiated stem cell. Any individual sick or side effects if caused, it will not pass on to progeny. Fundamental clinical research of therapeutic DNA is utilised to treat illness is known as SCGT. More than 600 clinical trials of SCGT are currently going on. Single gene diseases can be treated with SCGT. Replacement of numerous genes or genetic condition are not yet feasible to completely cure with SCGT.

GGT (germline gene therapy) is used to insert functional genes of germ cells into genomes of host cell. Organism’s cells contain modified gene of germ cells. As a result, mutation will be passed to future generations. Canada, Germany and other countries is prohibited in humans for scientific and ethical concerns, and increased risks compared to SCGT. US government has no rules that address alteration of human genetic. Delivering DNA into cells can be employed by several techniques. Recombinant viruses – Viral vector and bare DNA or DNA complexes – non-Viral vectors are the two primary kinds.

Delivery of genetic material into cells of host by virus is used to multiply, deceive cellular machinery of the host utilising virion templates. Therapeutic DNA with virus’s genetic materials is replaced by the scientist for their advantage. Human ailments can be done with retro or adeno or vaccinia, and adeno-associated virus. DNA or RNA like therapeutic DNA, in viral genetics which can be engineered to transient template which has ability to degrade naturally and host’s genome infiltration.

Gene therapy can also treat with non-viral vectors which provide several therapeutical benefits over viral vectors, which includes manufacturing in large-scale and less host immunogenicity. Non-viral techniques results in less transfection and expression of gene, and reduction of therapeutic effectiveness. Targeting of specific cell with the development of enhanced control of subcellular trafficking.

Onasemnogene abeparvovec used to treat SMA which is an application of gene therapy. It is administered as a single infusion into a vein. Abeparvovec operates by production of human SMN protein by cloning the new copy of the gene.

Nausea and increased liver enzymes are two common side effects. Serious side effects include liver issues and low platelets. Clinical investigations revealed transiently higher levels of cardiac troponin I; however, the clinical significance of these findings is unknown. However, cardiac toxicity was seen in other animal investigations. Because the medicine may lower platelet count, platelets should be examined before starting the medication, then weekly for the first month and every two weeks for the next two months until the number returns to baseline. After injection, liver function should be evaluated for three months.